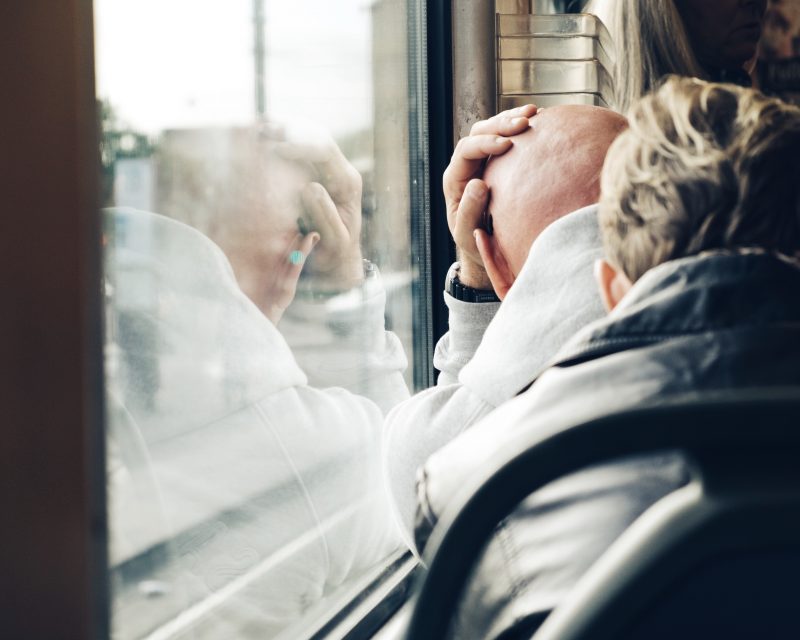 Dr. Paul Kelley, an academic at the University of Oxford, believes the traditional 9-5 schedule is making everybody miserable and sleep-deprived. He maintains that instead of trying to stick to a system that isn’t natural to our bodies, we need to overhaul our schedules to revolve around our circadian rhythms.

Most of Dr. Kelley’s research examines how early start times in educational institutions negatively affect student performance, particularly adolescents. However, his findings carry over to the corporate world. Adults don’t adapt to a 9 AM start time until the age of 55. So until that point, we’re all torturing ourselves trying to make it work.

During Dr. Kelley’s tenure as the head teacher at Monkseaton Middle School, he changed the school’s start time from 8:30 AM to 10 AM (a similar experiment is ongoing) and found that the number of top grades increased by 19%. If a delayed start time brought about these positive results in a school setting, what would happen if we applied a similar change to the corporate world? Are people more productive when they show up to work later in the day?

That’s what I decided to find out. I tracked the time and productivity of 3,100 DeskTime users throughout an average workday. This is what I found:

What time do most people start their workday? 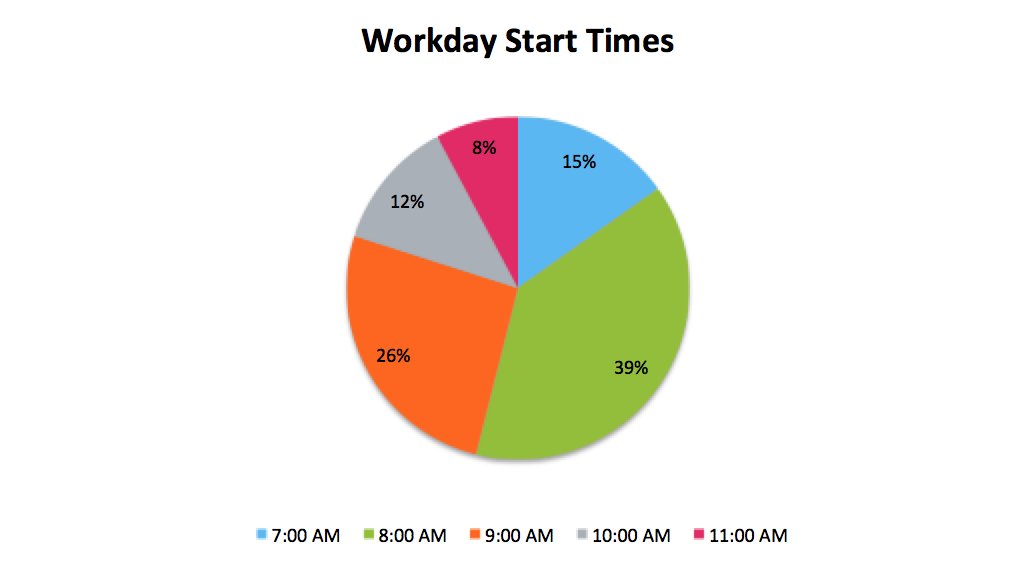 This chart shows that most people start their day at 8:00 AM. A relatively small amount of people (just 12%) start working at 10 AM. This is most likely not by choice but rather the required start time at each person’s place of employment.

What are the productivity levels during the first two hours of the day? 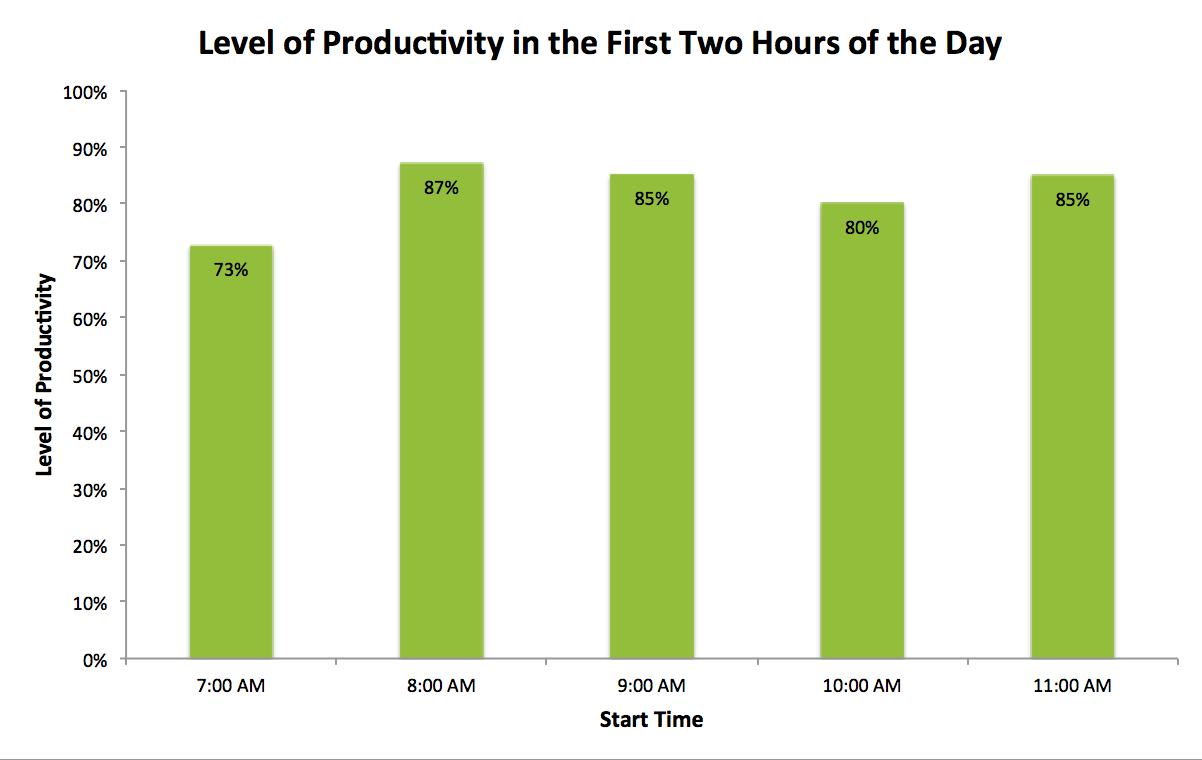 This graph examines each group’s productivity levels in the first two hours of the day. Productive time is determined by analyzing how much time is spent on programs that are considered productive, neutral, or unproductive.

The notable difference here is that the group of people that start at 7:00 AM has decreased levels of productivity than the other groups. Otherwise, productivity doesn’t drastically change.

What are the productivity levels throughout the whole day? 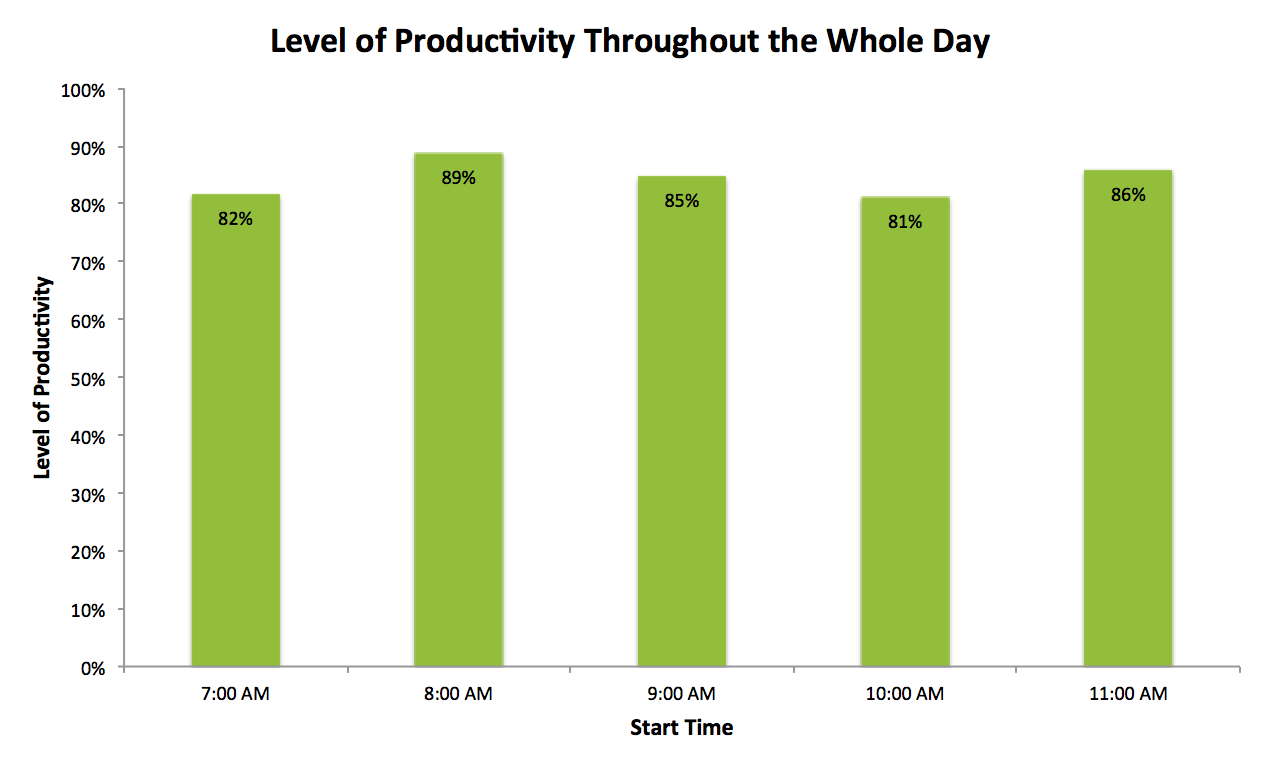 This graph examines each group’s productivity levels throughout the day. The main difference is again with the 7:00 AM group – while they appear to be less productive in the first two hours, they catch up by the end of the day.

Productivity is Possible in the Morning

What I found most surprising is that the majority of DeskTime users analyzed start work at 8 AM, and they are the most productive throughout the entire day. Overall though, it seems the productivity rates don’t differ much whether you start between 8 or 11 – it still ranges between 81.3 and 88.9%.

While this data analyzes general habits of DeskTime users, it doesn’t delve into the why or the health data of each group. Maybe people that show up to work at 8 AM are more productive, but are they more tired or stressed? It does show us that that it is possible to be productive early in the morning, and it adds to an already conflicted body of research regarding sleep and productivity.

Who is More Productive: the Night Owl or Early Bird?

Many studies have been conducted about people’s sleep patterns and preferences. One example is a study conducted by biologist Christoph Randler, who surveyed 367 university students about what time of the day they were most energetic, and how willing they were to be proactive in creating situations that benefited them. Randler concluded that:

“When it comes to business success, morning people hold the important cards. My earlier research showed that they tend to get better grades in school, which get them into better colleges, which then lead to better job opportunities. Morning people also anticipate problems and try to minimize them, my survey showed. They’re proactive. A number of studies have linked this trait, proactivity, with better job performance, greater career success, and higher wages.”

This notion has been supported by science and popular culture. Click here and here and here for articles about how morning people are happier, healthier, more productive than night owls.

One study conducted by the University of Toronto also reports more happiness and productivity in morning people, but it suggests that it’s only because night owls suffer from “social jet lag” – being forced to wake up and function several hours earlier than they’d prefer. This echoes Dr. Kelley’s findings – that people forced to wake up at a time that isn’t natural to their bodies aren’t as healthy or productive.

Making the Case for Flex Hours

Dr. Kelley acknowledges that people have individual differences in sleep/wake patterns that are influenced by sex and biological factors. Everybody has a specific chronotype – a biological preference for morning or evening. For some, it’s extreme, while others can comfortably drift between the two.

What Dr. Kelley suggests – delaying the start of the workday to 10 AM – may benefit those who prefer to work in the evenings. But I doubt it will make the working world more productive as a whole while there are people who still prefer to get all their work done in the morning. Plus, according to the data we pulled, it is possible to be productive earlier in the day.

Perhaps the solution isn’t a worldwide shift in schedule, but rather the implementation of more flexible hours. For example, at the Draugiem Group, employees have the option to come in for work as late as 11 AM to account for the individual’s preferred start time. Flexible hours are slowly catching on among other companies as a desirable perk.

There isn’t one, definitive time when everybody is the most productive. Night owls aren’t doomed to be outperformed by morning larks. And early risers really aren’t necessarily happier or healthier – their bodies are merely better synchronized with the 9-5 schedule. There isn’t one start time that works wonders for everyone so let’s instead focus on what works best for each individual.