Emails. The bane of every hard-working person’s existence. According to statistics, business professionals send and receive approximately 126 emails per day. With this number increasing, it’s no wonder we easily get distracted, overwhelmed, and productivity suffers.

To avoid the pitfall of an unproductive inbox, we reached out to Davis Siksnans, the co-founder and CEO of Printful, for his email management tips.

In just 5 years, Davis has built a multi-million company and a team of over 400 people. He believes that success lies in effective time-management and clear goals, and it all starts right there – in a stress-free inbox. Check out Davis’ tips and apply them to your own email management strategy!

1. Only read emails at certain times of the day

Constantly checking your email is a bad and time-consuming habit altogether. To avoid spending hours on end hitting the “refresh” button in your inbox, try to pick specific times during the day that you can dedicate to reading and replying to messages.

“I only read emails at certain times of the day. I use the Boomerang’s Inbox Pause feature, which allows emails to come in twice a day, at specific times when I can devote my attention to them,” Davis explains.

With Inbox Pause, new emails come into your Inbox only when you’re ready for it. This means you can block out time for productive work and even pause your inbox during evening or weekend hours to improve work-life balance.

This, in return, eliminates unnecessary stress, interruptions, and makes you feel like you’re actually in charge of your inbox, instead of the other way around.

“I suggest color-coding emails according to project colors. For example, all my work-related lists have colors like red or orange which makes them stand out, while personal lists are in green.”

Here’s a tutorial on how to get you started on labels:

Davis uses the “inbox zero” approach to email management to keep his inbox empty. In simple terms, Inbox Zero is a rigorous approach that aims to keep your inbox empty – or almost empty – at all times.

The method was developed by productivity expert Merlin Mann. He emphasizes that it’s not actually about the number of emails in the inbox – it’s the “amount of time an employee’s brain is in his inbox.”

While there are many approaches to achieving inbox zero, Davis recommends using a tool called The Email Game. “It makes you deal with each email in your inbox (reply, delete, archive, etc.) and discourages you to skip and move forward to the next email until you haven’t handled the previous one.”

4. Use smart filters to receive only most-relevant emails in your Inbox

Lists or emails where you’re just one of the many receivers are usually lower priority and should not take space in your Inbox. Instead, focus on emails addressed directly to you.

“There are also types of emails you still kind of need to receive, but they’re not your top priority,” Davis explains. “For example, order confirmations from customers if you’re running an ecommerce project like in our line of business. I choose to label them, mark as read automatically, auto archive so I can search for them later if necessary. Some email lists you need to check once daily or even weekly, so I let them skip the inbox, archive it and check them occasionally.”

Try this tutorial on how to use Filters Gmail:

If you’re working in sales, you probably already know just how important it is to follow up on the pitches you’ve sent and possible clientele you’ve contacted. The numbers are quite impressive – as many as 80% of deals require at least five emails before closing.

Davis believes that the follow-up approach should be applied to other aspects, not just sales. That way, you’ll avoid mismanaged projects and forgotten deadlines.

“I use Gmail’s built-in follow-up reminder feature. It helps me to stay in the loop and make sure that deals and conversations get closed,” he says.

6. Don’t use email for to-do lists

“I know that many people use their emails for writing down things to do, but I would recommend using apps that are specifically made for that purpose. For better to-do list management, I created an app myself – it’s called Later, and it’s a minimalistic app that sets reminders for everything you need to remember to do.” 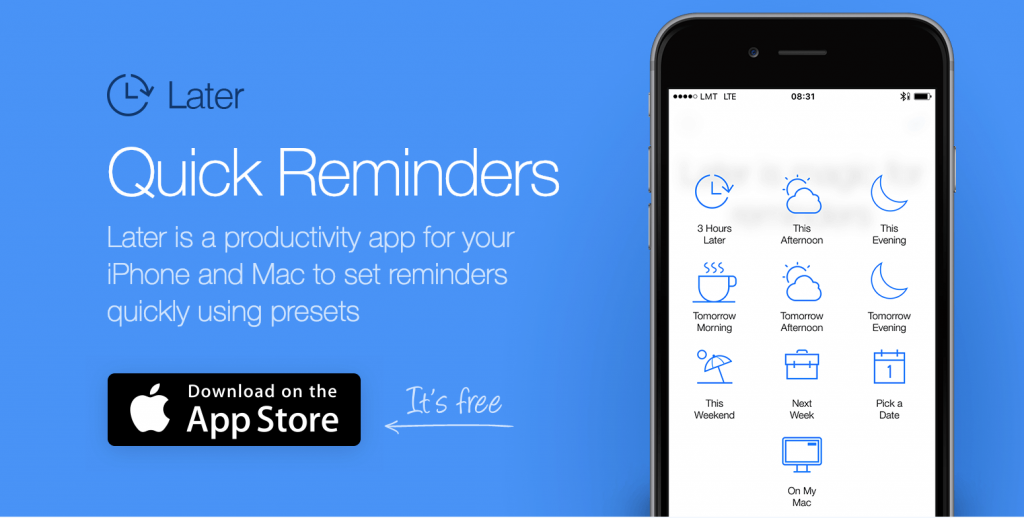 LaterApp is a tool that sets reminders for everyday tasks.

Here’s a list of other to-do list apps to use for task management instead of your email:

The same goes for your reading list. It’s not an uncommon practice to keep a list of links to articles you’ll read someday in your email. Instead, add them to a special reading app. “Use Apple’s Reading List, Instapaper or my favorite Pocket where articles can sit until you have the time for reading,” comments Davis.

Don’t let companies spam your inbox just because you hope they’ll send an interesting offer one day. Here’s what you can do instead:

“I use the 3-strike rule for promotional emails and newsletters. That is – if I have previously deleted a newsletter or a promo email from a specific brand twice, the third time I get a message from them, I unsubscribe from the list.”

Davis is also very careful as to which email lists to subscribe to and doesn’t hesitate to unsubscribe from companies that he’s already purchased something from previously.

You can also use services like Unroll.me that let you unsubscribe from unwanted email lists.

As Davis admits, Auto Advance is probably the single best Gmail labs feature next to Undo Send. Auto Advance automatically shows the next conversation instead of going back to your inbox overview. This happens each time after you delete, archive, or mute a conversation. That way, you cut down on the number of clicks from one email to another, saving time in the long run.

To activate the feature, search for Auto Advance in Gmail Labs:

If you think that getting used to different shortcut combinations may take you lots of time, think again. Most of Gmail shortcuts only require remembering one key, so you’re looking to a more productive inbox without having to memorize too many tricky combinations.

Gmail shortcuts are turned off by default, so turn them on in Settings. “My favorite is Tab+Enter to Send,” says Davis. For more Gmail shortcuts to maximize your email productivity, check this list.

Do you have your own email tips? We’d love to hear them – share with us in the comments!