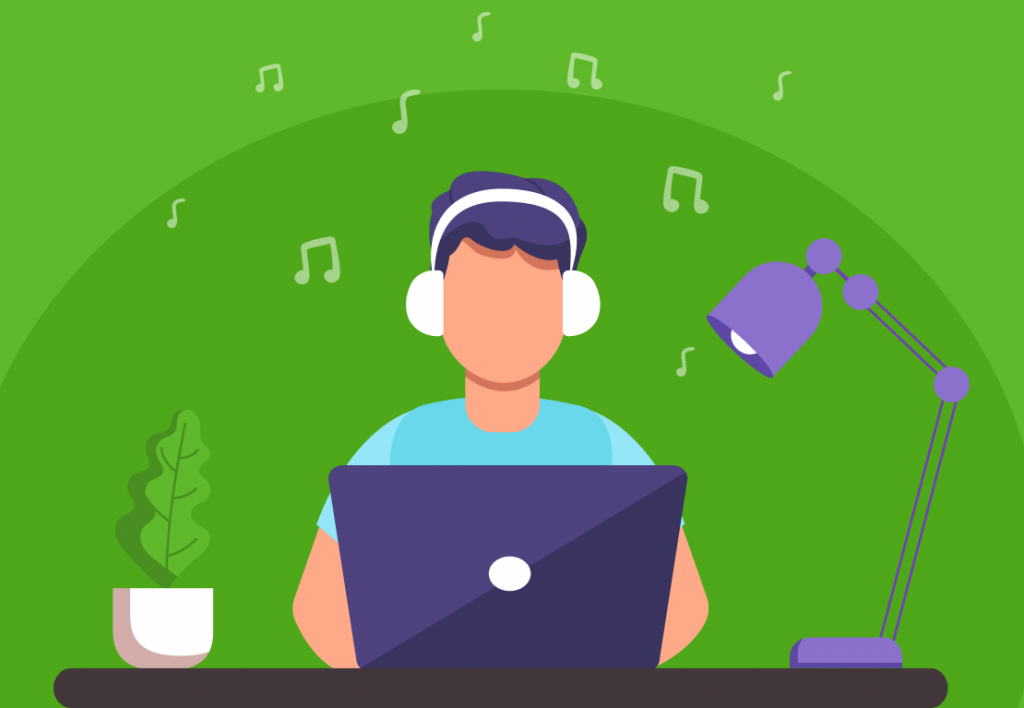 Listening to music at work is still an individual thing – one can find it helpful, while others, disturbing. Yet, various studies claim that it’s able to boost overall workplace performance.

In a survey by Spotify, respondents admitted that music helps them do more because it creates a relaxing state, which makes them less nervous and fatigued, more energetic and enthusiastic while doing everyday tasks.

Meanwhile, there’s a pretty direct scientific relationship between music and productivity. First, it boosts the levels of neurotransmitter dopamine – a brain chemical that can help people focus. Second, music activates different neural networks of the brain, including those associated with creativity and motivational behavior. Thus, the areas in the brain responsible for creative thinking and motivation, work more intensively while listening to music.

Enhanced brain activity could explain why many researchers have concluded that music listeners are on average more productive than others. Yet, it’s not that it makes employees work harder and waste less time. We examined 6028 DeskTime users from 50 different companies, and it turned out they spent similar amount of time on work related tasks when using one of the selected music apps, as when they were not.*

And right before we started to question the relationship between music listening and work performance, we noticed something interesting:

Employees tended to work longer hours if they listened to the music.

Their workday got about 7% longer. And what they were doing during this overtime wasn’t less surprising. Instead of using this time for doing some fun stuff, they were actually… working. The data shows that 67% of this time was spent on productive work.

So, instead of a standard 8h working day, employees were working 8h 34min while listening to the music. Out of those 34min they spent almost 23min on work-related tasks. No wonder they could end up getting more things done than those working in silence and leaving earlier.

So when you need to stay later at the office, listen to music! Here are some tips how to do it right and get the most out of it:

First, put the music in the background.

Music works as white noise that blocks out other distractions. That explains why it makes you better at focusing on your tasks. Meanwhile, this passive music listening still boosts your mood, increases motivation, makes you better at solving problems, and thus helps you get more things done.

Music without lyrics could work better as background music. So consider something from the classics, jazz instrumentals, or dance tracks, which are the most likely to increase your efficiency.***

Major mode music appears to have a stronger positive effect on the productivity than the minor mode music. It also enhances interpersonal communication that feels more satisfying and smoother. So, if you have a meeting, music that’s rhythmic and sounds happy will be more effective.

A recent study found out that it doesn’t matter what kind of music you listen to as long as you enjoy it. Listening to preferred music makes you feel happier, increases creativity, alertness, and helps you focus on the tasks that must be done now. Thus, either it’s pop, hip-hop or classical music, with or without lyrics, in the minor or major mode – in the end it’s your taste that matters.

Your favorite music can indeed boost the energy you need to finish the tasks at hand, but don’t make staying late at the office a habit. It, of course, doesn’t mean you can’t listen to music if you want to get home on time. But don’t lose the track of time either – remember about taking effective breaks and get home at a reasonable time.