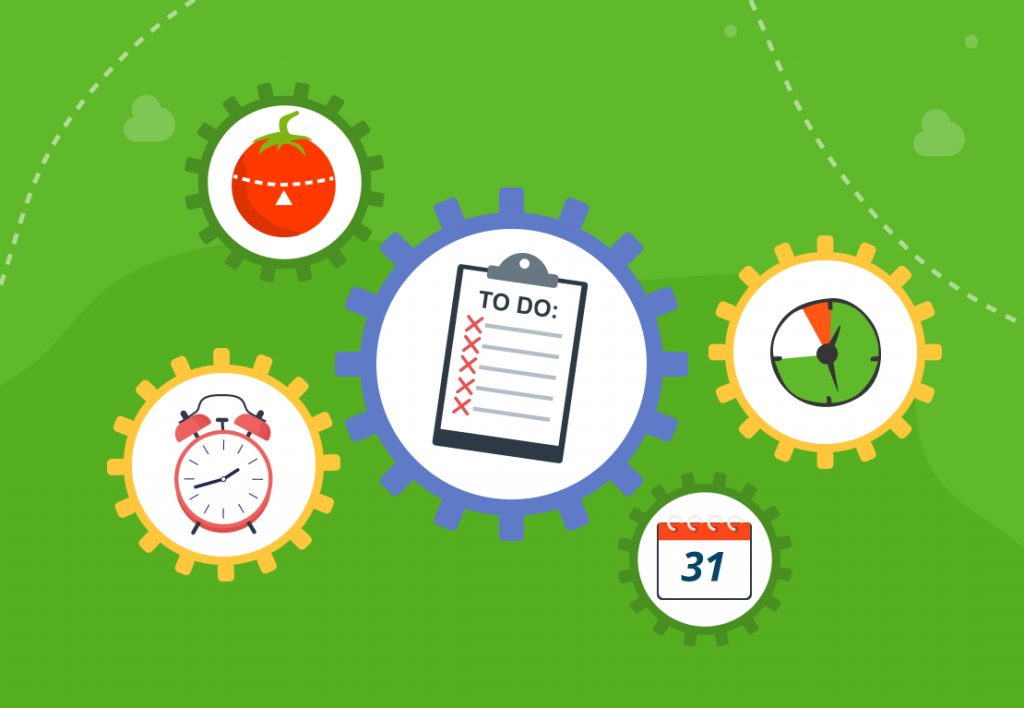 DeskTime loves productivity research and experiments. Over the years we’ve organized quite a few studies and published our finds, often scoring media attention.

One of our biggest viral hits has been the 52-17 rule, which is often referred to as the ideal work-to-break ratio. There are many apps and tools based on the 52-17 productivity rule and it’s often quoted in articles or even cited in academic studies.

While the 52-17 rule may have hogged most of the spotlight, it isn’t the only productivity research DeskTime has conducted. So, if you’re a bit of a data geek, same as we are, this summary of DeskTime’s studies will be a great read for you. Let’s take a look at our many discoveries throughout the years!

Or take the shortcut:

The 52-17 rule and its updated version

DeskTime gathered the results by studying the time tracking app’s user data – we isolated the top 10% of most productive employees and analyzed their computer usage habits during one workday.

Seeing the 52-17 ratio appear brought a conclusion that quality breaks lead to getting more done.

DeskTime’s find of the ultimate work-break ratio for productivity was a big hit on the news – BBC, Inc, Fast Company, and more media wrote about it.

But in 2021, 7 years after the initial productivity research, DeskTime repeated the study to see if our latest force majeure – the pandemic – had shifted the productivity rule. And honestly, we weren’t that surprised to see that it has.

DeskTime saw that the most productive individuals now work and break longer – 112 minutes of work are followed by a 26 minutes long break. We closely analyzed the 2021’s find, and it became clear that the pandemic and the rise of remote work has everything to do with 52-17 going 112-26.

Blurred lines between work and life, working longer hours to compensate for not being in the office, increased amount of meeting time due to remote setting – it all has contributed to changes in our work-break ratio.

Employee performance research: all about the working hours

We’ve dug into the data on such elements as workday length, start/end time of work, and more. Here are some employee productivity statistics from DeskTime’s discoveries.

Does the 9 to 5 work model support employee productivity?

It’s well known that our circadian rhythm affects our productivity. Keeping that in mind, DeskTime began wondering if the 9 to 5 working model is actually effective from the perspective of workplace productivity statistics.

Our 2015 productivity research tracked the time and productivity of 3,100 DeskTime users and found that most of the analyzed users that started working at 8 AM showed the highest average employee productivity statistics during the workday. Thus, generally, earlier working hours ARE productive.

Length of workdays during the week – does Friday get the biggest workload?

Another DeskTime study from some time ago looked at the average workday length. Back in 2015, we assumed that Friday is the shortest workday as everyone signs off for the weekend.

Here’s what DeskTime found then:

Explanation – employees simply run out of energy as the week goes on. However, it would definitely be interesting to see how and if the workday length has changed by now.

Another of our past studies exploring working hours looked into the correlation between workday length and productivity levels. The initial assumption was that shorter working hours could mean lower productivity, however, DeskTime’s 2019 productivity research found that it’s actually not true.

Our 2019 productivity research served as yet another proof that longer hours don’t equal more things done.

Turns out that employees working 6 hours show the same productivity levels as those working for 8+ hours. Should we continue sticking to the 8-hour standard then?

Shopping at work and other distractions: employee productivity research

Workday length, start/end times, and break duration aren’t the only things that impact productivity – we encounter a bunch of distractions every day that can sabotage how much we get done.

So, obviously, we wanted to study work distractions as well. Here’s what we’ve found on workshopping, Black Fridays, and the most common distractions at work in general.

In 2018, Cyber Monday became the biggest shopping day in US history to date. A record amount of money was spent, and DeskTime had a hypothesis that the crazy shopping was probably done during work hours.

DeskTime’s study found that on Cyber Monday 2018, employees spent quite a lot more time shopping during work hours than on a usual workday – 2.3 times more to be exact. Additionally, on Cyber Monday 38% more employees were engaged in workshopping than usual.

What about you? Do you engage in workshopping?

The most recent DeskTime study explored if workers actually take a day off to indulge in a shopping spree on Black Fridays. Keeping in mind the 2018 results on shopping during Cyber Monday, we assumed that Black Friday vacay could be a thing.

And it actually is. DeskTime study showed that 1.07% of US employees take a day off on Black Friday and are 2.6 times more likely to take time off than on any other workday.

What is the most common distraction at work?

Every day, we’re distracted by a whole lot of things, some of which we have no control over. But are the no-control distractions messing up our productivity the most?

In 2020 DeskTime conducted a study to identify the most common workplace distractions.

Besides external and internal distractions, things that we consume daily can also significantly impact our productivity. So far, DeskTime has explored the correlation between productivity and coffee, beer, and listening to music.

I think it’s safe to say that coffee is a religion for office workers. Plus, the words “coffee” and “office” contain almost the same letters – is that a coincidence? I don’t think so.

Millions of office workers all across the world rely on coffee to get them through their workdays. Considering the great importance of coffee in our lives, in 2020, DeskTime did a coffee productivity study, by connecting DeskTime’s office coffee machine to a telemetry system, which tracked the number of caffeinated drinks made.

Then we compared the coffee stats with the productivity data from DeskTime software, which all of our employees use. Here’s what we found:

Fun fact: As the coffee effect wears off, you’re left with even lower energy levels than you had before the drink. So, people are naturally prone to reach for another cup of coffee afterward.

Beer may be the other drink associated with office life. Coffee is for daytime and beer accompanies office happy hours or after-work hangouts with your colleagues. But maybe it can be beneficial for your productivity? In 2014, DeskTime conducted a productivity experiment to find out if there’s a link.

What Julia found was that the first beer indeed released creative juices and helped her tackle a tricky task. But as the 2nd beer kicked in, it all became too blurry and productivity was nowhere to be found.

The correlation between music and workplace productivity statistics

I’ve experienced the effect of music on my working abilities, and I’m sure you have as well. Some tasks don’t mind a soundtrack, while others are doomed if I don’t work in silence.

Music and productivity is a topic DeskTime has also explored. In 2015, DeskTime examined 6028 software users to see what effects music had on work productivity.

Employees tended to work longer hours if they’re listening to music – 8h 34 min instead of the 8h working day on average.

Need a booster to get more things done? Have a tight deadline to conquer? Just push play!

Bonus: Is productivity more of an introvert thing?

Another intriguing study DeskTime has conducted compares productivity levels between extroverts and introverts. Back in 2018, we decided to see which personality type is more productive.

Result: 61.45% of DeskTime’s most productive users said that they’re introverts, while 38.55% were extroverts. As a result, it’s likely that office workers who are introverted will get more done and show higher productivity levels.

Additionally, there are plenty of reasons why hiring introverts may be a good idea. They’re good listeners, tend to establish meaningful connections, are great at solving problems, and make good leaders.

The growing number of DeskTime users has made it easier to conduct various studies. So, a huge thank you to those among you who have completed our surveys or have in other ways participated in making data-based discoveries!

We have plenty of new original study ideas in mind, so stay tuned to hear more on DeskTime’s latest discoveries.

Another thing we’ve found is that tracking your work hours with DeskTime can boost one’s productivity levels by up to 30%. Give it a try if you haven’t yet!